Julie of the blog OzarkEquiTrekker granted us permission to republish this hilarious and painfully familiar post, guest-authored by her husband Sutton.

Having been indoctrinated into the “horse culture” by my wife four years ago, I have come to understand a great many things about the equine world, and more importantly, about the people who ride these magnificent creatures.

As I’m sure anyone who is involved will tell you, having a horse is not a hobby, it is a lifestyle that becomes all consuming, involving planning all of your day-to-day activities (“I can’t go out to dinner because Monday, Wednesday and Thursday are my flatwork days at the barn but you can go without me!”) as well a planning point for your weekends (“We can’t go see XYZ in six months because I have a show that weekend and I need to be there” or “I’ll be at the barn on both Saturday and Sunday because I need to prepare for the horse show in six months”). 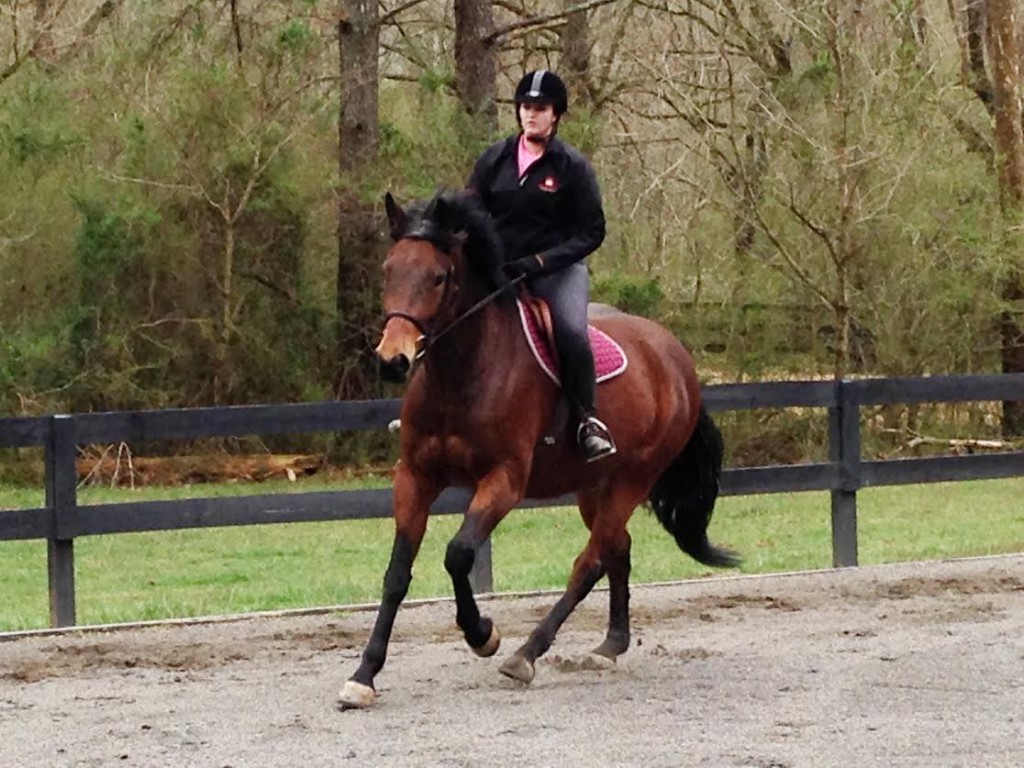 Julie and The Horse

After driving home from the barn one Saturday not long ago (shocking) with M10 ring sand in my shoes, sunburn on my head, and bags under my eyes from having to be up early (“Got to get to the barn early to tack up, clean tack, watch someone else ride” etc.), it finally dawned on me: I’m married to an addict. 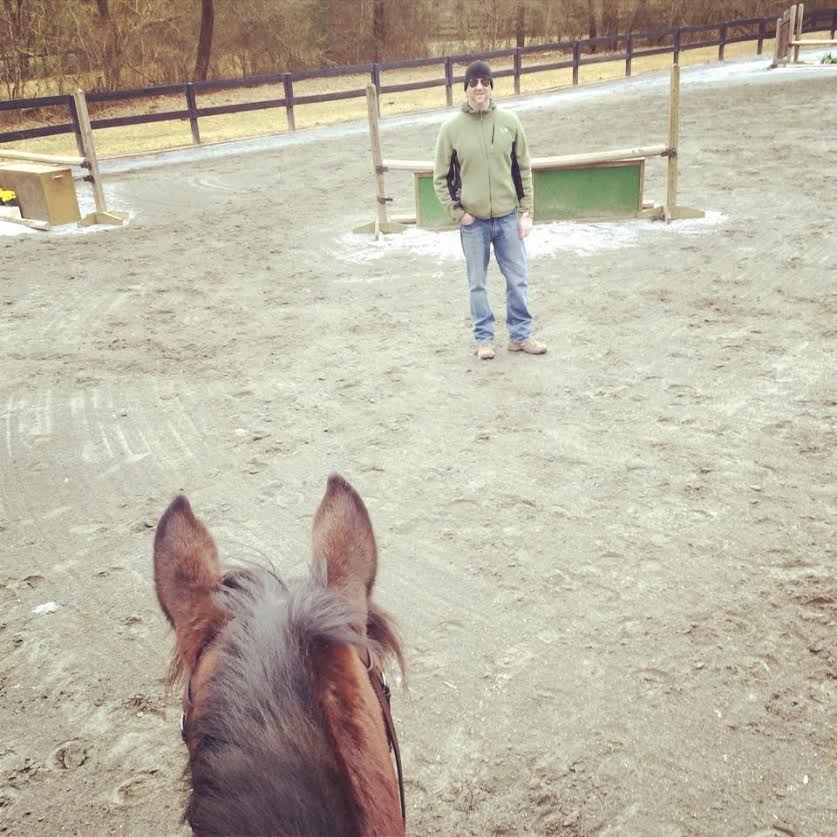 As this realization slowly crept through my barely functionally brain, I felt the color drain from my sunburned face. Horse addiction is real and I’m living in the middle of it. Suddenly, a bulb lit up in my head like a light in a dark tack room as I connected the pieces. This addiction dictates your schedule, your social circles, and your finances. And here’s the worse news: there’s no cure. Allow me to present of few key pieces of evidence:

As with most addicts, Horse Addicts gravitate to other Horse Addicts and eventually you’ll realize that your only contact with the outside world is funneled through the skewed lens of addiction. This helps the addicts to justify their behavior by seeing the same behavior mirrored by others who have the same affliction.

All conversations will be about horses, horse-related activities such as horse shows, tack shops, tack shops at horse shows, what events to do at the next horse show (“I can’t decide between the 2’9” or the 3-foot” and “What did you think about my equitation on that last line I rode?”). As with other types of addicts, horse addicts surround themselves with other horse addicts so these conversations seem normal and will treat any conversations about anything else like it’s trivial. (Me: “Did you see the news about ‘Insert Major World Event’ last night? Her: “Nope never heard of it but did you see that there’s going to be an ‘A’ show in Aiken next month and EVERYONE is going to be there.” This conversation is happening while her face is glued to her iPhone while trying to defeat level 2768 of Candy Crush but that’s a whole different post). This also permits the behavior without having to accept that the addiction is growing. Denial is the first stage of addiction in all cases.

Horse addiction will eventually rule your schedule. It starts small — “Let’s go to the barn this weekend so we can spend quality time together” and eventually escalates into me taking time off from work to trailer to horse shows, setting up stalls and 6 a.m. feedings —  which occurs in July, in 95 degree heat, with barn dust in every part of my body, just to watch a 15-minute class.

It then morphs into any spare time that’s not at the barn is spent PLANNING for the barn. It has even gotten so bad that some days my wife wants to go to the barn just to SEE the horse on days she can’t ride just to get the “horse monkey” off her back. Heaven forbid we have a few days of inclement weather. You would think that she was being personally punished by God from the wailing and complaining that she hasn’t been able to ride for 48 hours. Like most addicts will tell you, if you’re not using then you’re figuring out when you can use. Same with horse addiction. 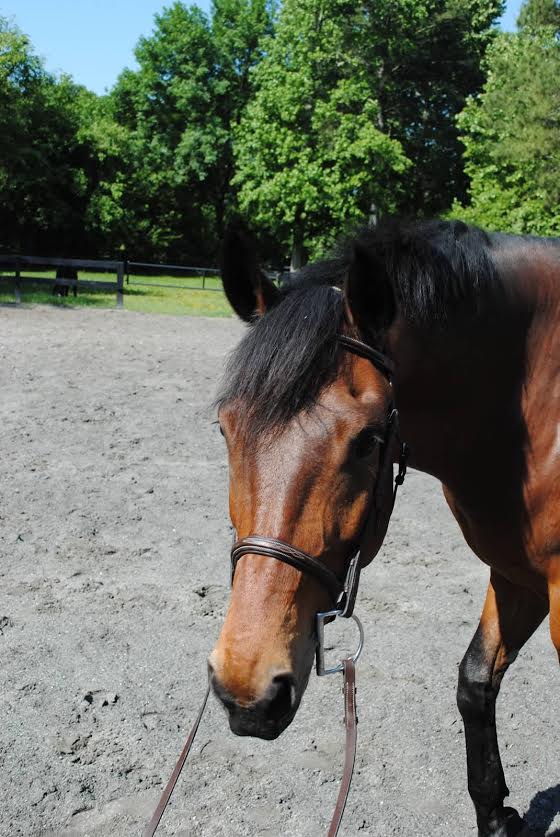 Who could go 48 hours without seeing this sweet face?

I’ve had said many times and will say again: Horse addicts are tougher than just about any other athlete I’ve ever met. I have seen broken bones, dislocated joints, bone bruises, scars and concussions. And that was just last weekend (OK, slight exaggeration on that one but not much). Yet no matter how beaten and battered their bodies may be, they get back on the horse. I mean I’m all for being tenacious and never giving up but after my third concussion, I would be reevaluating how I was spending my day.

Not Horse Addicts. The physical toll on their bodies is but a tiny price to pay for achieving flying lead changes or being able to go down that outside line and clearing that 3’ double oxer with ease. Again, if you’re surrounded with other people that are used to falling from a 1,600-pound animal, landing flat on your back from six feet off the ground, and then just catching your breath and getting back on to try again, this may not seem like abnormal behavior. However to the sane, normal world, it is eyed with the same curiosity of a race car driver who slams his car into a wall at 190 mph, bursts into flames, and then just walks down into the pit and hops into a another car and continues the race. EVEN RACE CAR DRIVERS AREN’T THAT CRAZY.

I’m an avid golfer and I can tell you with certainty that the first time I played a round of golf and dislocated my arm to the point the pain was about to make me go unconscious, I would take up a new sport. Not Horse Addicts. This is called “just another Saturday at the barn” to them.

In the “adding insult to injury” category is the money. Riding horses isn’t called the “Sport of Kings” because it’s regal. It’s called that because it is a never-ending money suck and you need to have a small kingdom to support it (as a side note, I wanted our horses “show name” to be “The Money Pit” because I thought it would be hilarious if she was introduced into the show ring as “Now riding The Money Pit….” This joke was not well received as you can imagine).

Whenever a horse “need” is identified, Julie acts much like Tyrone Biggums from “The Chappelle Show”: scratching an imaginary itch on her neck and looking around to see if there’s a DVD player laying around that can be pawned so she can get the “horse jones” satisfied.

I’m also relatively confident that the Equine Vet is the Devil in human form and we have agreed to give them our firstborn in an effort to settle an outstanding bill of some sort. I’ve become immune to receiving invoices from the vet and have learned better than to even open them, lest my hopes for the future be crushed by the “amount due” box. I also feel confident in saying that I’m pretty sure we put their kids through a least a few years of Harvard. All of this from a girl who won’t even go to the doctor herself unless she’s missing a body part and even then it’s a “judgement call.” 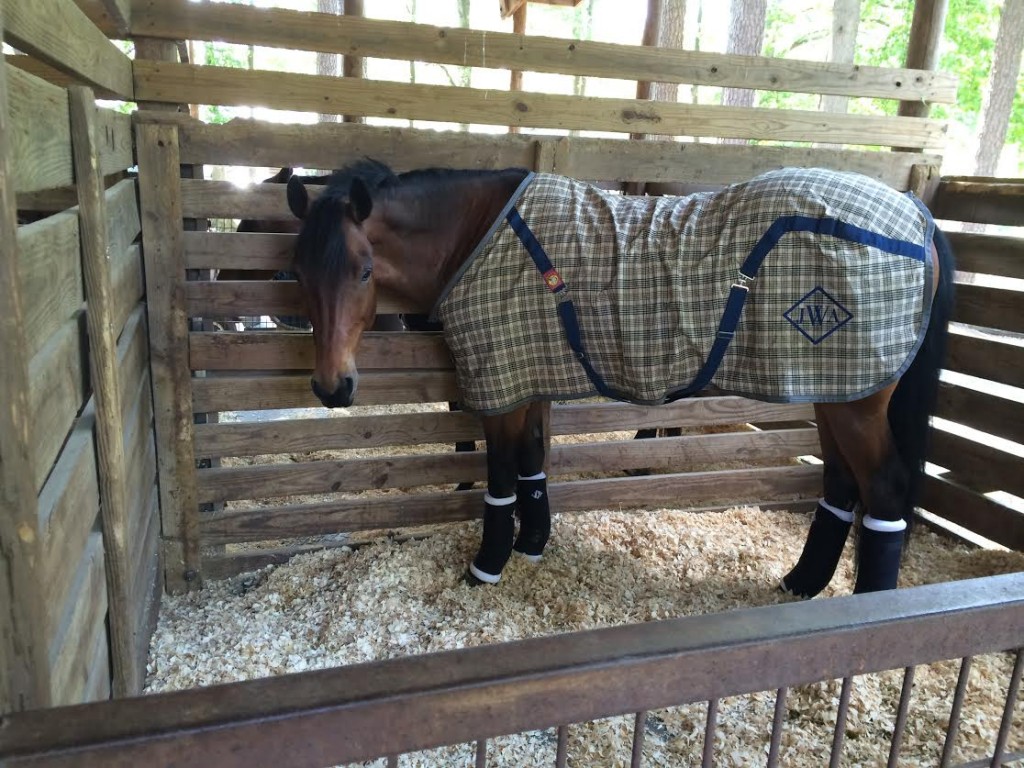 But he NEEDS matching monogrammed Baker Blanket and stable wraps.

As you can see, horse addiction is a lesser known but very real issue faced by a small, select few in society. As the addiction continues to grow, so do the desperate cries from the families who are directly impacted by this very first world problem.

Postscript: This post was written with more than a little sarcasm to it and is in no way meant to make light of people who suffer from true addiction. It is my somewhat humorous attempt to cope with the equine issues that effect our lives. Thanks for reading and I’m accepting donations.

Many thanks to Julie and Sutton for sharing this post! Be sure to check out Julie’s fantastic blog, OzarkEquiTrekker, for recipes and, as Julie puts it, “the circus that is my life with my hubs, dogs and pony.”