From hunter princess to rodeo queen? Weeeellll, not quite.

Now, let me say this. I don’t like riding Western.

I hate the big, bulky saddle that makes me feel far away from the horse’s back. And bling makes my eyes bleed. What can I say, I was raised in the hunter-jumper world, where embroidering your initials on your collar is considered a bold fashion statement. But I was in a bit of a rut with my riding and the horse I was leasing at the time. So when a friend invited me to take a lesson out at her reining barn, I was intrigued. Maybe breaking out of my comfort zone would be just the trick.

As fellow HorseNation blogger and Western rider Kristen Kovatch explained to me, reining is like a tricked-out, showy version of reined cowhorse competition, in which horses and riders have to turn on the haunches, gallop, and stop quickly to control a cow’s movement.

“If you try to stop a cow with a reiner and slide 25 feet, guess what–your cow will be long gone about 20 feet ago while you were too busy sliding around,” she said.

Soon my lesson day arrived and I was ready to try reining for myself. I ditched my britches for jeans, and ventured out into southern peninsula of Maryland…practically a different state from the central suburbs where I have to carefully plan my evening barn time, taking roundabout routes to avoid tolls and DC-area traffic when I escape to the barn. Here, the land was flat, the highways were empty, and  field board could be had for about $200!

I could get used to this.

I rolled into the farm with my friend, down the long, dusty driveway towards the hitching posts where boarders were getting their own horses ready to ride. I noticed a major difference, and it wasn’t the blinding bling. These Western quarter horses were TINY compared to dressage warmbloods! I could see over their backs! 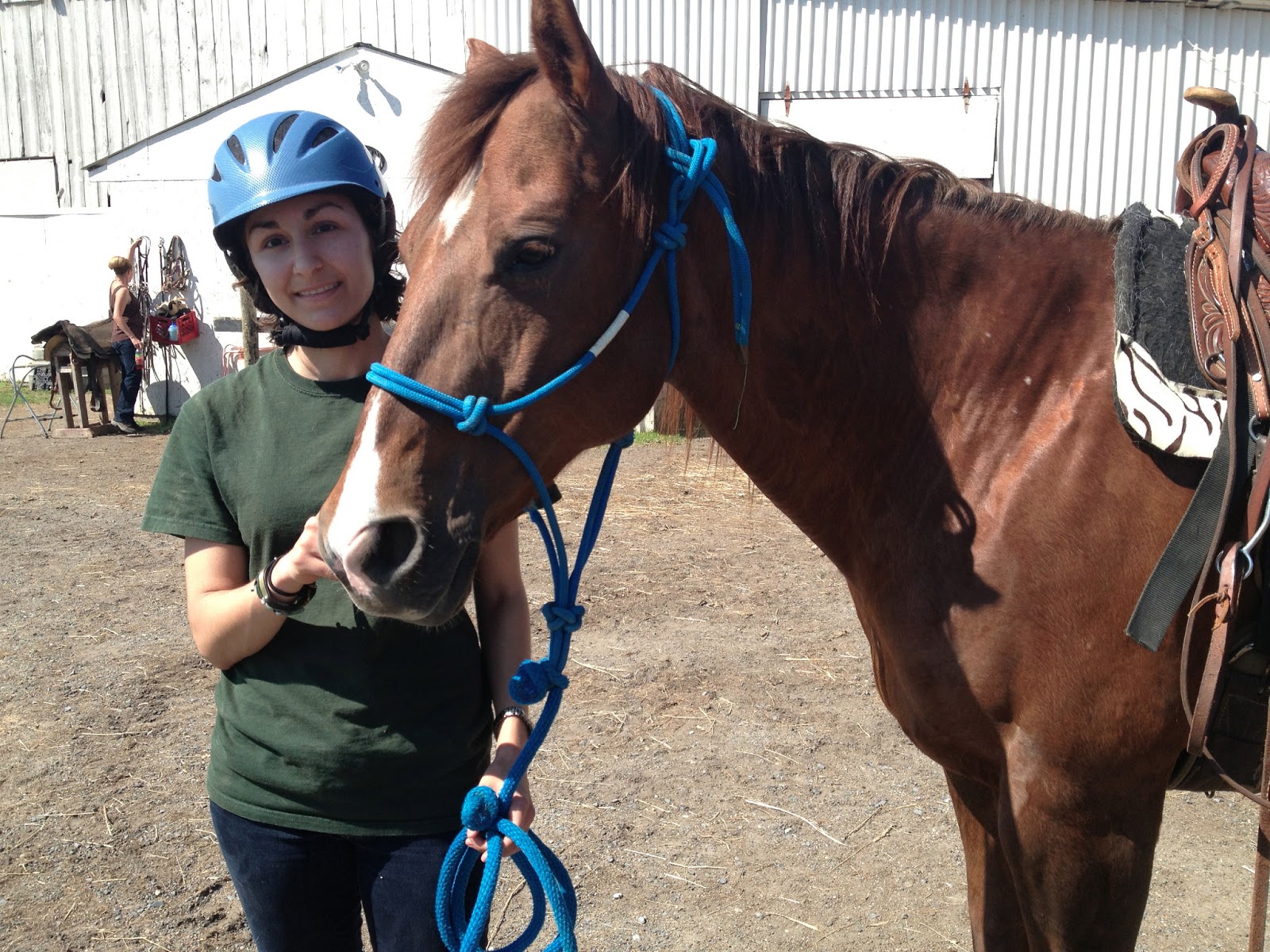 While my friend  tacked up her more advanced competitive reiner, my lesson mount for the day was a mare named Lena.

Of course, first things first. Before I could even consider reining’s fancier maneuvers, I had to learn to steer Western-style. The difference appeared to be that to steer one-handed in a curb bit, you lift your hand, put one leg on, and take the other leg completely off the horse so you are pushing into an empty space. Then you drop your hand again once the horse starts going in the direction you want. As I found out the hard way, a Western horse is likely to get confused if you keep both legs on while trying to steer. Lena quickly figured out how green I was to all of this and took it upon herself to help me practice this new kind of steering by ducking in, stopping at the gate, and cutting corners. I guess that is why she is a lesson pony!

Though the commands were slightly different, I found that there were more similarities than differences between reining and the dressage lessons I had been taking. Forward, forward, forward was the mantra! (Well, actually it was “Kick ‘er on!” but that’s southern Maryland for you.)

At the end of my lesson, I even got to try some spins on my friend’s horse, a gelding named Starlight.

First, we circled around in slow motion. Like a pirouette, only with less jump. I was very pleased that I didn’t just topple off the side of him!

“He can go faster than that,” my friend teased.

“I don’t know if I can go faster!” I said–but I sat up tall and reminded myself that I could just grab the saddle horn…

Thanks to saintly Starlight…NOW I understood the appeal! Now just to try it with a cow!

You can see the full video of my not-so-graceful attempts at reining spins here: