Morgan Freeman has arguably one of the most recognizable faces (and voices) in Hollywood. What might surprise you is that he’s also an equestrian.

Freeman’s iconic roles range from classics like Driving Miss Daisy and Shawshank Redemption to superhero blockbuster Dark Knight. The actor told Cowboys and Indians magazine in 2010, “He first rode a real horse as a child in the farm fields near his Mississippi home. After the day’s work was done, he volunteered to ride the mare, a large plow horse, back to the barn. Jumping up onto her ample back, bare feet and legs sticking out straight on either side of her, he rode along the road. He finally managed to get the tired mare into a trot, but her gait was so rough that he promptly bounced right off and onto the dirt. Freeman couldn’t get himself back up on the horse, so the two walked the rest of the way back to the barn together.” (SOURCE) 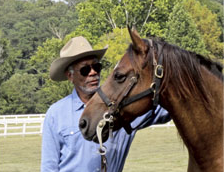 At the age of 19, now relocated to San Diego, California, he rode a horse named Socks at his friend’s riding stable. “He was a great horse and taught me a lot about riding, especially about being confident in the saddle,” Freeman says. “So I thought that I could ride and was doing it right, as he responded so well to me.”

Freeman’s first horseback movie role came in 1990 with Robin Hood, Prince of Thieves, a role that he says taught him humility in the saddle. In an interview published in People We Know, Horses They Love, Freeman stated, “I would stay on the horse by gripping him hard with my feet. Of course, this was giving the horse mixed signals. That horse master worked with me throughout the months that I was in England, and when I came back to the States I had truly learned how to sit a horse and how to ride.” 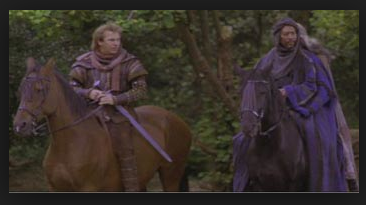 All of the flat riding for that movie was performed on a black Andalusian named Fury. Cowboys and Indians reports, “Freeman remembers the beautiful Andalusian as an amazingly self-aware animal. ‘When we did a photo shoot for the movie,’ Freeman recalls, ‘I was sitting on a stool in front of a backdrop, and Fury came in behind me, stood perfectly still, and looked at the camera.’”

It was a rowdy jumper named Spike that took his toll on the actor. Freeman, now 77, remembers a particularly daring cross country scene in Sherwood Forest when he was popped out of the tack and took a bad fall. “I was only 50-some years old then,” he jokes during the interview.

After filming finished, family matters brought Freeman back to his home state of Mississippi. There he purchased a 124-acre ranch and his first horse named Sable, a dun Quarter Horse gelding. 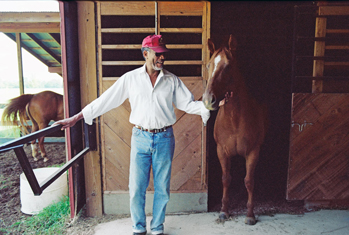 He recounts one horrifying moment to authors Rappaport and Wilkinson, “I recall one life or death situation when my bridle broke and Sable start to run on his way home. We had to cross the highway, and I was just sure that there was going to be a log truck coming just as we got there. Our next hurdle was a big fence that Sable couldn’t jump. He had to turn at a full run. Then he couldn’t get into the gate because he was running so fast and didn’t want to stop. Suddenly, we came to a lower gate that Sable was able to jump over, but it had a tree stump in front of it so he started to slow down. After his first breaking move I thought, ‘Okay, he’s going to jump,’ so I set myself in the saddle for the jump. But he didn’t do what I expected. I went over his head. Then just as I am getting up, Sable jumped and gave me a little kick in the head. When I finally got standing, he was only ten feet away from me, as if to say, ‘We cool!’”

Like any good equestrian, Freeman’s first thoughts were for the horse. After checking Sable over, the movie actor walked his horse home. 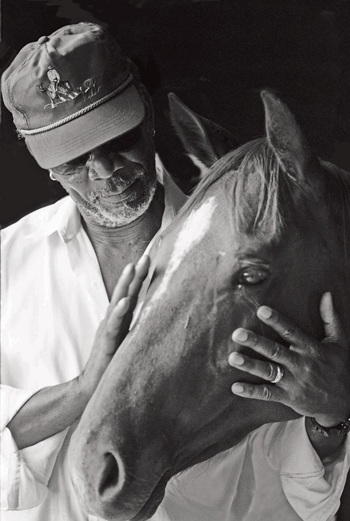 In 2004, Freeman owned seven horses between the ages of 20 and six months old. He has a staff that cares for and grooms them, but no one gets on their backs but Freeman himself. He says, “When home, I try to ride every day and sometimes twice daily.”

The actor hasn’t signed up for a horseback role since 1992’s Unforgiven. One problem, he wants to ride his own horse. “I would want to ride Sable, and the production company won’t let you use your own horse because of the liability.” 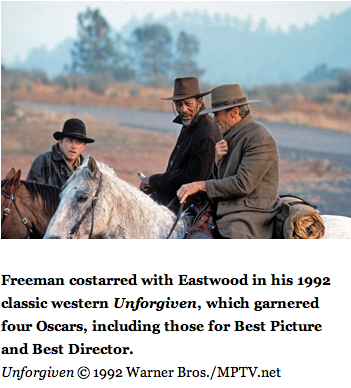 The bond between Sable and Freeman is obvious in all of his interviews. He concluded, “A lot of times Sable will be out there and there may be several hills, so I will walk him down and he follows me. To me this is so comforting and reassuring. This is the time that I feel totally complete, totally liberated, and totally alive.”