Celebrate Canada Day by learning about its national symbol, an equine breed so tough and dependable it earned the nickname “The Little Iron Horse.”

The Canadian Horse descended from French stock, consisting of 36 mares and 4 stallions from Breton, Norman, Arabian, Andalusian and Barb breeding, originally sent to Canada by Louis XIV between 1665 and 1670. 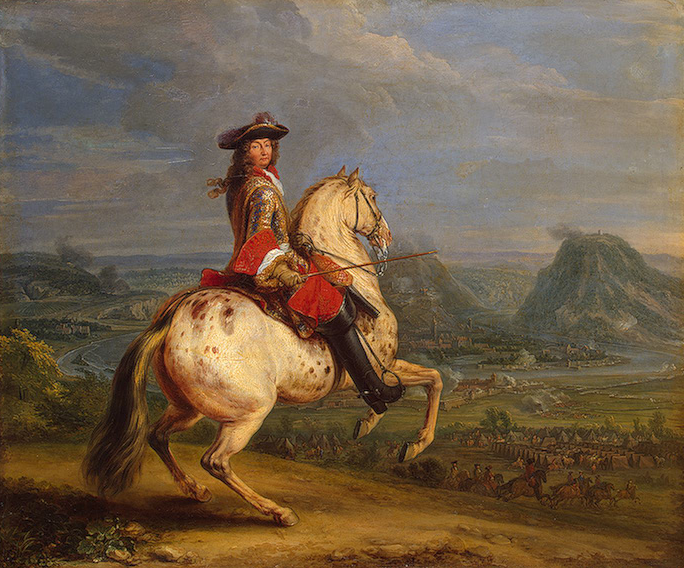 The horses were leased to gentleman farmers or religious orders for money or in exchange for a foal, and they remained the property of the king for three years.  Despite hard conditions, the horses thrived, increasing numbers exponentially and eventually spreading down into Michigan and Illinois.  Many became feral.

After the Expulsion of the Acadians, when French colonists were forcefully expelled by the British, Canadian horses were crossbred with US and British stock and were used primarily for light draft work.  Consequently the breed split into three distinct types: the “Canadian Pacer,” the “Frencher,” and the “St.Lawrence.”  It was also during this time period that Canadian painter, Cornelius Krieghoff, became famous for his paintings displaying the horse in winter scenes. 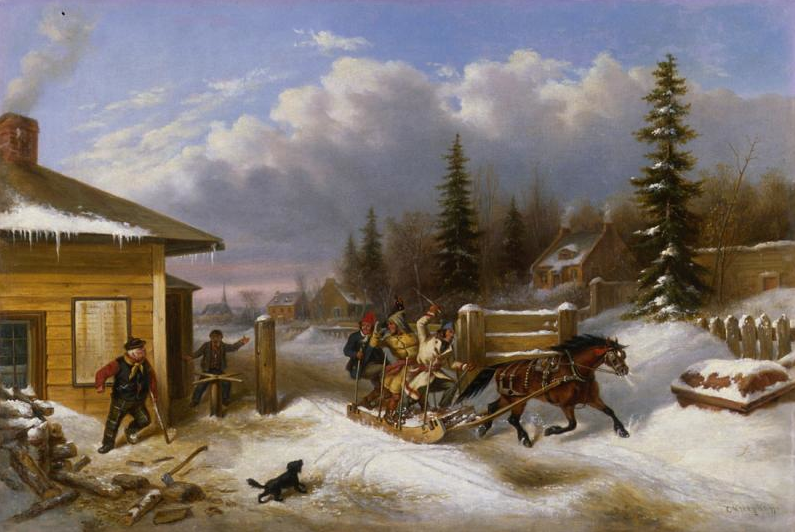 By 1849, there were an estimated 150,000 Canadian horses.  Many were exported to the West Indies and the US where they were used for light draft work, as well as roadsters, stagecoaches, and freight wagons.  Thousands were also imported to be used as cavalry and artillery horses during the American Civil War.  The Official Horse Breeds Standards Guide by Fran Lynghaug stated, “The Canadian horse played a major role in the history of that war; it has even been said that the North won simply on the fact that its soldiers had the better horse – the Canadian.” 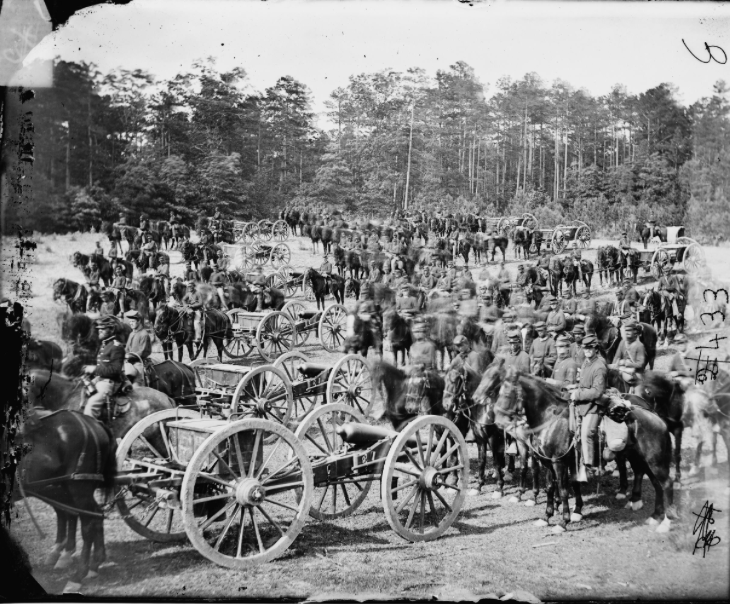 By 1880, the Canadian horse was all but extinct and in 1886, further export from Canada was forbidden by Quebec law.  Several experimental breeding programs began to improve the breed, though not necessarily preserve it.  The program sought to preserve the breed’s trademark stamina, but increase the height from the average 15hh to 16hh.  Foaled in 1913, Albert de Cap Rouge was said to have been one of the most influential sires of the breed. 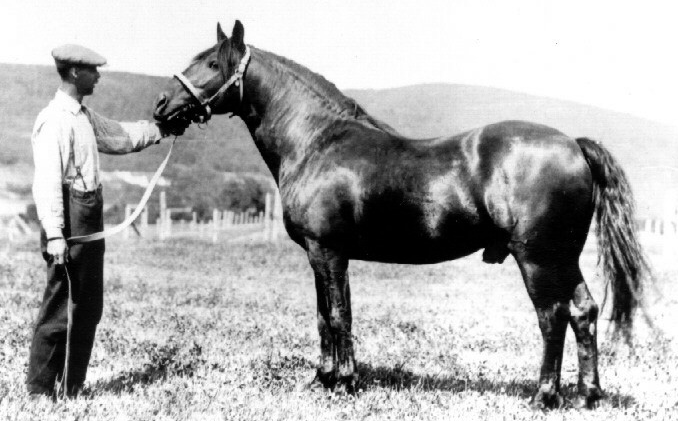 Unfortunately, the advent of mechanized farming equipment and the global crisis of WWI and WWII, ended all federal breeding programs.  The herds were disbanded and sold at auction.  By 1970, there were as few as 400 Canadian horses worldwide.  It wasn’t until the 1987 North American Driving Championships that breeders began to take notice of the Canadian again.  Don Prosperine’s Canadian pair, Nip & Tuck, won the competition.

In 1989, Donnie passed away, but his son Frank carried the torch.  According to Cherry Creek Canadians, “For two years, Frank Prosperine, Donnie’s son, drove Canadians on Parliament Hill, carrying actors who represented Sir Wilfred Laurier and Sir John A. MacDonald. His horses were used in parades to open the Ottawa Exhibition and the Ottawa Winter Fair. In last year’s Grey Cup Parade, these Canadians carried the award-winning football players. They were used in movies, and opened Scottsdale Farm an equestrian centre where the television show ‘The Campbells’ is filmed.” 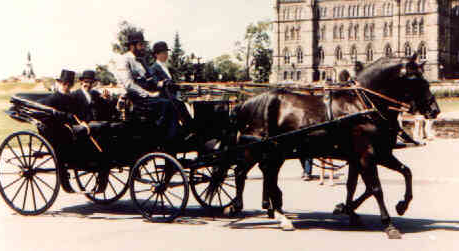 By the mid-1990s the Canadian horse had a population near 3,000 worldwide, though it is still listed as “critical” on the American Livestock Conservancy list.  In 2002, the Canadian horse was made an official animal symbol of Canada by Parliamentary Act.  In 2010, the provincial legislature of Quebec named it a heritage breed of the province.

Today, most Canadian horses are used as riding and driving horses, and are known for their jumping ability. 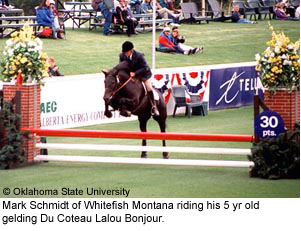 They are seen in competition in almost every discipline, as well as for leisure riding.  They can also be found in light draft work, trail riding, and working as a stock horse. (SOURCE) 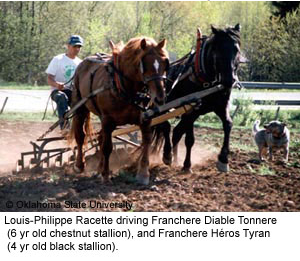 Most Canadian Horses are dark colored.  Their height averages 14 to 16 hands and stallions average 1,050 to 1,350 pounds, while mares weigh 1,000 to 1,250 pounds.  Their trot is described as flashy. They are known for being hardy horses and easy keepers.  The Canadian horse played a role in the development of the Sable Island horse, Morgan, the American Saddlebred and Standardbred. 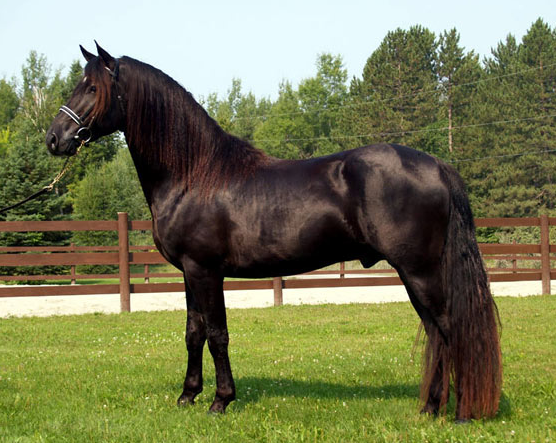