It was a wild and woolly XC day with only 35 out of 78 riders making it around the course, which has been described as one of the toughest in decades. Check out these thrills and spills!

An impossible save by Britain’s Mary King aboard Imperial Cavalier at the Outlander Bank — not only does she stay on, but she takes care to not cross her tracks and incur a penalty on her way to the next obstacle:

Here’s Nicola Wilson and Beltane Queen scraping over the Vicarage Vee, breaking the frangible pin (a safety feature installed in certain cross-country jumps that allows the rail to drop, thereby stopping the horse from somersaulting):

And then there was this amazing save by Tom McEwan…

…they went on to complete, and the horse trotted up fine on Sunday morning, finishing in 31st place! Check out the whole sequence here, courtesy of Nico Morgan Photography.

Izzy Taylor and KBIS Briarlands Matilda had a runout at this utterly massive corner.

A hairy effort for the US’s Tiana Coudray and Ringwood Magister at the corner but they make it over to complete the course with just one stop.

Mark Todd hopped back on NZB Campino after falling on top of the fence but was unfortunately eliminated. Nice try, Toddy!

Thinking this is probably not going to end well for Carolyne Ryan-Bell and Rathmoyle King.

A frightening moment for Rebecca Howard and Riddle Master. They broke the frangible pin but recovered well, only to later part ways at the Mirage Pond.

Mark Todd and Leonidas II went for a swim at The Lake when he lost steering blew and galloped straight into the deep water.

Job well-done to all who finished and many congratulations to the event’s winner, Sam Griffiths! His mount Paulank Brockagh is only the fourth mare ever to win Badminton! 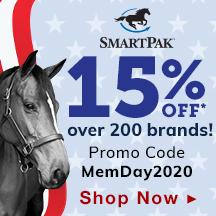