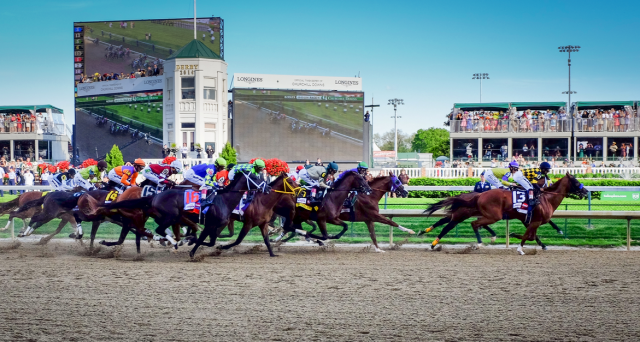 Congratulations to California Chrome, the odds-on favorite who ran away with the win (and our hearts) in the world’s most famous race this evening.

Horse Nation’s racing editor Heather Benson has been waving the banner for this horse for months, having become a fan herself after watching him absolutely obliterate the field in the California Cup Derby in January. After researching and writing about his humble back story, her enchantment with him only grew. A summary of his tale, as the AP Press put it: “A horse with a humble pedigree. A couple of working stiff owners. A 77-year-old trainer with his first Kentucky Derby horse. Even Hollywood couldn’t have made this up.”

I asked Heather yesterday who she thought was going to win and she explained that although her head told her to resist betting on the favorite — statistically speaking, they rarely win — her heart was cheering him on. “Racing desperately needs his story right now, it is storybook perfect,” she explained. “EVERYBODY wins if he wins… and truly, I think the only way he gets beat is by racing luck, or rather the lack of it!”

California Chrome was ridden by jockey Victor Espinoza, whose last Kentucky Derby victory came in 2002 aboard War Emblem, and trained by Art Sherman, whose closest brush with Derby fame came when he accompanied Swaps, the 1955 Kentucky Derby winner, to Louisville as an exercise rider decades ago. In a press release Art described the win as “awesome.”

“I’m breathless,” he said. “This is so cool. I think I rode the horse with Victor (Espinoza) the last 70 yards. It was a picture-perfect ride. He was right where he should have been all the way around. Coming down the stretch I was thinking: ‘Keep rollin’ big boy. Keep rollin’.’ This has to be the sweetest moment of my life. To be my age and have something like this happen, what can you say? For all my friends in California, this is for you. We did it!”

Last but not least, it was great fun to meet California Chrome’s owners, Perry Martin and Steve Coburn, who bred an $8,000 mare to a $2,500 stallion to produce the one and only egg in their basket, California Chrome. Before the Derby the owners turned down offers of up to $6 million for the horse, explaining that you can’t put a price tag on a dream. Their gamble paid off and Sherman was all smiles after the race, explaining in the NBC broadcast, “He gave me the biggest thrill I ever had in my life.”

Here’s a replay of the race:

We wish California Chrome the best of luck in contending the Triple Crown’s remaining two jewels, the Preakness (May 17) and the Belmont (June 7). From the winner’s Twitter feed: