Budget cuts across the nation, not to mention the concerns of animal rights activists, are threatening the age old institution of mounted police officers.

The New York Times notes that police horses are seen as a “costly bit of sentimentality” that need to be reevaluated during economic crisis.  It’s hard not to be sentimental when looking at these historic photos. 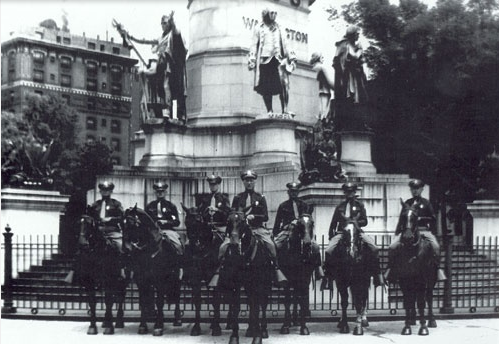 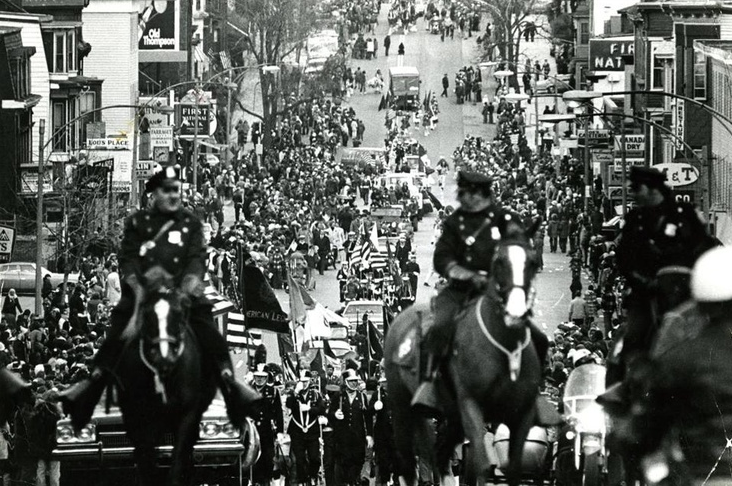 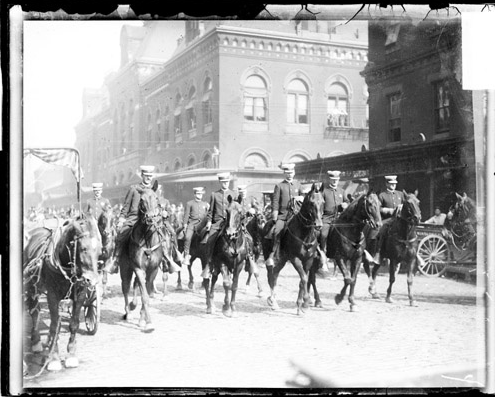 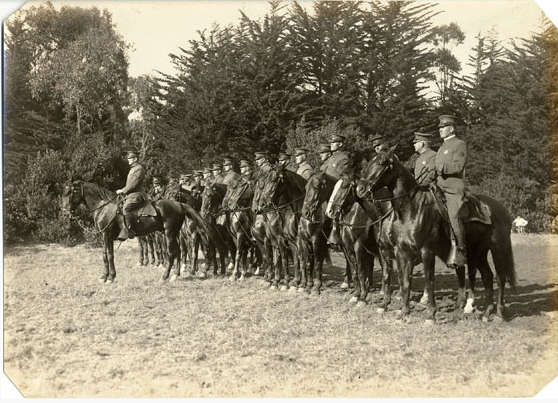 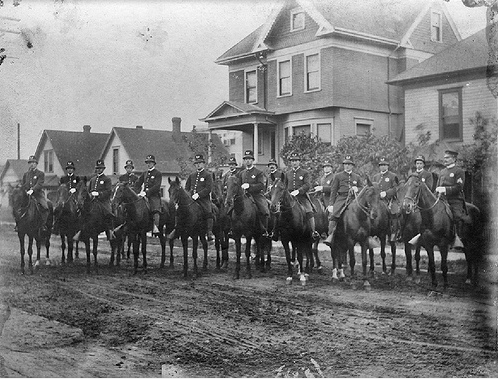 “It seems like horses are always among the first to go when it comes to budget cuts,” said Mitchel P. Roth, a professor of criminology at Sam Houston State University in Huntsville, Texas.  Unfortunately that was the case when Napoleon (pictured below) lost his job, along with five other horses, when Charleston, South Carolina retired their mounted unit in 2011. 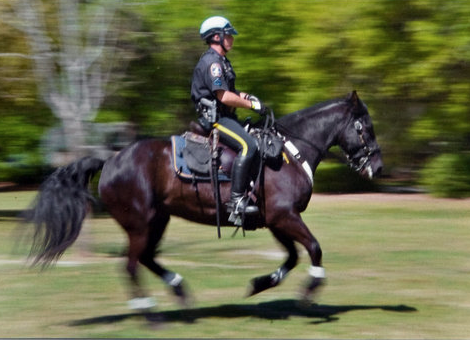 “Officers in the mounted unit, by necessity, spent a couple of hours of each shift getting their horses ready, traveling with their mounts to their posts and then getting them bedded down. They rarely spent eight hours on patrol.  When we started to look at that, it was a lot less expensive for us to operate bicycles and electric vehicles and other things than it was to maintain the housing and feed and care for the animals,” Charleston’s police chief, Gregory Mullen, said to NY Times.  The city reported they could save $250,000 annually by shutting down horse operations.

The mounted units in San Diego; Tulsa, Okla.; Camden, N.J.; Newark; and Boston, whose police horses dated to the 19th century and were regulars at Fenway Park have also closed their stable doors. 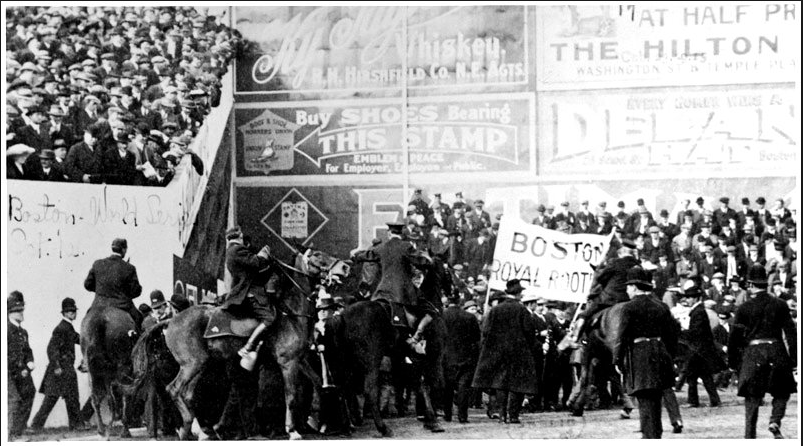 Portland, Oregon recently ran a poll on whether or not they should continue to pay for their mounted police.  The survey participants overwhelmingly voted yes (78.69%) and yet the city is still threatening to end the unit, hoping to save $860,000 annually in the process. 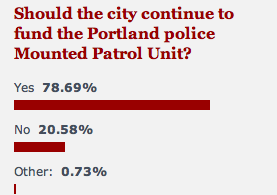 The city officials are correct on one count…horses are expensive.  Many police units rely on horse donations but still the training per horse can cost upwards of $8,000.

“We’ll have helicopters hovering above their heads, shooting from horseback, having horses go through flare patterns,” says LA County’s Sheriff’s Sergeant Haertsch says. “It’s not natural for a horse to do that. They have to be trained to be able to do that. We need training for horses, for officers, and for the unit as a whole.”

The Atlantic Cities reports when Haertsch first joined L.A.’s mounted unit part-time in 1996, he had to buy his own horse, pay a monthly fee, and provide his own saddle and trailer. Though the department now provides the gear, deputies still have to help pay a horses’ stabling costs. “The department pays for the radio car,” Haertsch says, “but not for a horse.  This is where it takes very dedicated individuals to do this job, because they have a lot of responsibility.” 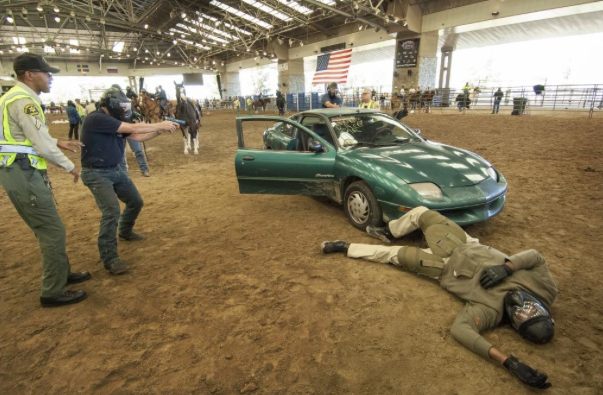 The North American Mounted Unit Commanders’ Association’s #1 goal is to prove that horses are relevant to a 21st century police force.

Jim Ruiz, a retired New Orleans mounted police officer and an associate professor of criminal justice at Penn State University Harrisburg said to The Atlantic Cities, “In major urban areas, a mounted division is one of the best tools available.  We used to have an axiom in mounted, ‘If you run from us, you’ll only go to jail tired.”

And then there is the public appeal.  Mounted officers bring back childhood memories of the Lone Ranger and Dudley Do-Right.  The Atlantic Cities writes that passersby will come up and pet the horse and talk about what’s going on in the neighborhood. As Ruiz puts it, “You may have the biggest jerk in uniform, but all the public sees is the horse.”

Close to my own home, the Houston Mounted Police regularly speak at schools and other public engagements.  Were it not for their cute horse partners would the public be as interested in their message?  On a side, this unit is very actively involved with Natural Horsemanship and every single horse on the force operates barefoot. 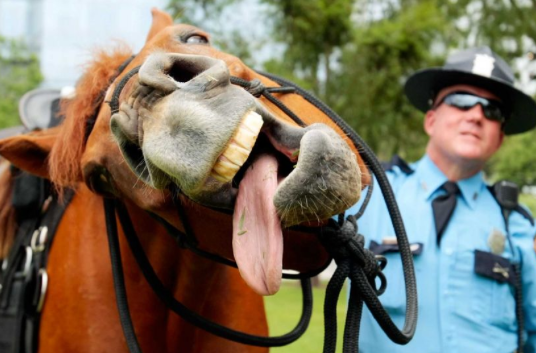 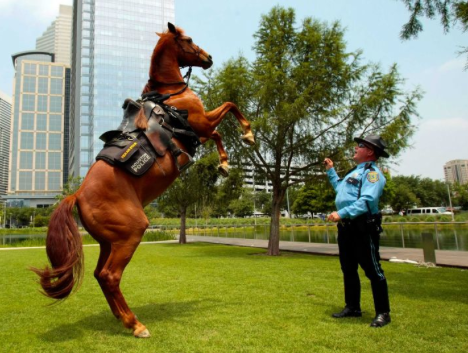 So what do you think Horse Nation, are mounted police still viable crime fighters or are they a thing of the past?