Fleeceworks Cinco is no stranger to Horse Nation–we’ve been keeping tabs on this rising star for some time. Jenni Autry checks in.

From Jenni: We hear all the time about horses at the top of the sport, but what about the next generation of equine talent? EN’s Got Talent introduces the future superstars of the sport, interviewing riders about how they’re tackling training with these youngsters. Have you spotted a spectacular young horse at an event you think should be highlighted in this column? Tip me at [email protected]

Tamra Smith was on the hunt for a young event prospect to produce when she met Fleeceworks Cinco at Kristi Nunnink’s farm. Kristi had purchased the then 3-year-old Holsteiner gelding (Cascani x Kawas Joy) from October Hill Farm in Texas. “You kinda forget where they started from when you’ve been riding them for so long,” Tamra said. “He didn’t really know how to steer or go on the bit. He couldn’t turn and he would bulge his shoulder and keep going straight instead of turning.” But Tamra saw the potential in Cinco. While she’d already put together a syndicate to buy a young horse, Judith McSwain of Fleeceworks ended up buying him outright, and the horse become Fleeceworks Cinco.

Cinco turned 4 in May of 2011, and Tamra started entering him in Young Event Horse competitions on the West Coast. He won his qualifying event at Rebecca Farm and went on to win the YEH 4-year-old West Coast Championships at Twin Rivers later that year. As a 5-year-old, Cinco won each of his three YEH qualifying events at Twin Rivers, Galway Downs and Rebecca Farm, where 30 horses competed in the division. He then capped off an amazing season by winning the YEH 5-year-old Championships at Twin Rivers. “He also holds the highest score in the history of the Young Event Horse series,” Tamra Said. “He scored a 92.3 as a 5-year-old at Twin Rivers.”

Tamra has been a big supporter of the YEH series and has spoken to judges at her area convention to learn more about how the scoring works at the events and what the judges want to see. “The judges always want to see a horse they’d like to ride,” Tamra said. “On the flat, Cinco’s a very extravagant mover, but he’s also very smooth. He has a super uphill trot and canter, a great walk and an exceptional mind. When you see him go, he just looks very fun to ride. I have a smile on my face in most of the pictures of me riding him because he really is just a joy. In his first real competition, he had a stop in the show jumping because I just enjoy riding him so much that I forgot he’s a baby and he’s still asking questions.”

After a stellar conclusion to his 5-year-old season, Tamra moved Cinco up to preliminary at the beginning of this year. He was third in his first preliminary start at Galway Downs in February. Tamra took him to Twin Rivers the next month, but knew right away that something was wrong when Cinco started his cross-country trip. “He was winning the dressage by a large margin, but he didn’t feel right to me on the cross country,” Tamra said. “I had my vet look at him, and we decided he’s going through a weird growth spurt where he’s awkwardly built all of a sudden. We decided to give him some time to get through the growth spurt and not keep pushing him.”

Next week on EN’s Got Talent: Cinco is unique in that he’s the first horse I’ve featured in this series who isn’t actively being campaigned right now. But the message Tamra is sending about giving a horse time off when he needs it is such an important one. Next week we’ll hear more about why Tamra made this decision, as well as her plans for Cinco’s return to competition later this year. “The good thing about it and why it’s unique for me is I’m really lucky because I have a lot of nice young horses right now,” Tamra said. “That helps because you take out the selfish part of yourself competing and you really focus on what’s best for the horse.” 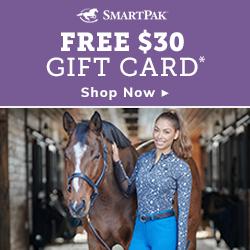