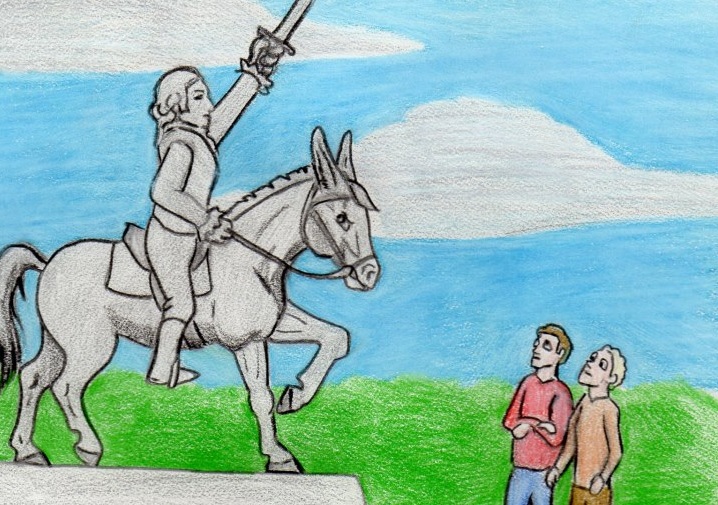 I was stranded at the edge of the Grand Canyon for awhile over Labor Day Weekend, and I got to ruminating over long ears.  Brighty the burro and his fellow wild ones traversed the Bright Angel Trail first, and many donkeys and mules have since followed in their footsteps. But I wondered, how did those hybrid long ears get their start in America?

I was rather surprised to discover that that an amusing myth I’d heard actually proved to be true. Citizens of Horse Nation, George Washington may be the Founding Father of America, but now I know he could be JUST as beloved for being the bad”ass” breeder of the first real American Mules. First commander-in-chief? Great. Crossing the Delaware? I certainly wouldn’t have wanted to. But Mr. Washington, you had me at Hee-awwww!

In late 18th century America, there were certainly a few lamely-bred mules floating around the original colonies. They were occasionally accidental crosses, and often grade farm mares crossed with short stocky jacks.

But Washington, being a gregarious farmer and having an appetite for exotic and jaw-dropping animals (Mount Vernon did after all house America’s First Camel) set out to establish not just any mule in the colonies, but a Super Mule. He intended to prove to surrounding farms their versatility as farm workers, riding steeds, and carriage teams, and did he ever.

At the gates of Mount Vernon. Photo by Lorraine Jackson.

In 1785, King Charles of Spain had caught wind of Washington’s zeal for the long-eared hybrid, and sent on two jacks to the Americas by ship. Only one survived the journey, and the jack became known as Royal Gift. Royal Gift was a mammoth jack, standing at approximately 15 hands, and as best as they can tell was likely an Andalusian ass in breeding.

According to documents salvaged at Mount Vernon and from other letters written by Washington to others, Royal Gift was a bit of a royal snob, and for the first year showed absolutely no interest in covering Washington’s prized mares carefully selected for the hybridization. They instead were bred that first year to a lovely Arabian stallion, while Washington and his livery sorted out how to solve Royal’s selective tastes. In the end, they went with the good ole bait and switch by bringing in a naggy old jenny and switching her out at the last minute with the mares. Worked like a charm.

At some point in very late 1780s, Washington’s old military companion Marquis de la Fayette gifted another jack and two jennies from Malta, which allowed Washington to expand even further. By 1799, Mount Vernon was sporting 57 of the finest mules on the continent, and surrounding farmers and high society aristocrats of the colonies were knocking down Washington’s door for a mule of their own.

Washington’s Virginia homestead of Mount Vernon would continue to flourish after his passing in 1799 up until the late 1840s. Sadly, his great-great-nephew could not pay for the upkeep of the vast estate, and the facilities and preciously maintained farmland began to decay on the Potomac’s riverbanks. In 1853, a group of women known as the Ladies of Mount Vernon took on the task of restoring Washington’s most beloved farm and home, and today the property is not only in its exact Washingtonian glory in structure and land, but also in livestock. Washington’s rare beasts (including the camel), unique cattle, and yes, his mules, once again grace the estate and are on view for the public 365 days a year.

Moreover, there are a many jacks and jennies and a few mules in America which purportedly trace their lineage back to Royal Gift, America’s first finely bred mammoth jack. Historians’ best guesses are that Royal, like George and Martha Washington, made Mount Vernon his final resting place, though no marker notes his body. But should you pass through the property someday on a visit to our nation’s capital, pay your respects to dear ole’ Royal, too!

There is a beautifully illustrated children’s book called Farmer George Plants a Nation which focuses on the President as a farmer and his love for Mount Vernon and his animals, and includes a great George/mule illustration! Written by Peggy Thomas, illustrated by Layne Johnson.